Knock on the Coffin Lid is a fresh roguelike. The game combines interesting and thoughtful dialogues with RPG elements. RedBoon Studios – independent indie developers have brought Knock on the Coffin Lid to life. K.O.T.C.L. can easily captivate you because of the random events and dialogues of the main characters. Interesting stories move from one character to the next. It will not leave anyone untouched.

Knock on the Coffin Lid has a very seriously thought-out fight system, and you have to calculate each of your combat. This mini-guide will help you with that.

It’s easy to predict that the game starts with a knock on the coffin lid.

Each of the characters is very different from the others. The differences can be seen in the gameplay as well as in the story. Each character will expose you to Knock on the Coffin Lid and its plot from a new angle.

Each of your characters has no belongings left when they die, and all experience is nullified. There is no such thing in other games of the roguelike genre. All that was left from the last attempt was a general reaction to the events.

Сharacter Percival has risen from the dead. You will get to know other K.O.T.C.L. heroes later on.

Percival has a set of initial skill cards, and after every battle and all other events, you will get additional ones. After the fight, you can choose one of three cards. The cards are dropped in random order. Boss fights increase the chance of elite cards falling out, so you’ll have to try harder. It’s not necessary to have a large set of cards. It’s better to collect rarer, more powerful, and more useful cards. It is happening because the deck is constantly repeating movements. We recommend constantly improving your cards. Remember, you have the entire deck in your hands at the beginning of combat. Each round you get the top 5 cards. Once the deck doesn’t have enough cards to fill your hand and everything you discard is shuffled and goes into the deck.

There are exceptions, burns denotes that a card will disappear from the deck after use, it is condition cards.

All cards, except those given by equipment, may be improved once. The improvement of a card is shown in green text color. If you see a card with green text after fight, you are given an additional improved unique card. Cards are improved at rest or as a result of certain events.

All cards and things have a color differentiation on the name, by which you can immediately see how rare this card is. The color differentiation is pretty standard. You should remember that normal cards are indicated by gray, rare cards by blue, and yellow indicates that the card is epic.

While ordinary cards have only one kind of enhancement, which can increase damage, block, or reduce energy costs, each character has its unique cards, which can be improved by one of three kinds. Such reinforcements have a strong influence on strategy and an adaptive parameter.

Percival has two unique cards: lunge 5 cards and reflection 3 cards. After fight you get only one card, equipment gives you several cards in your deck.

There are five card categories in the game: talent, attack and skill, condition, and a curse. Although at first glance they are similar – the difference is enormous.

Talents are the most powerful cards in the game, acting for the entire fight.

Skills are the most diverse category, where everything falls. Blocks, defenses, magic, and putting positive and negative effects on characters. Some will give you extra cards, the ability to go over your deck, and even give your energy.

States are the negative cards that enemies add to a character’s deck under certain conditions or attacks.

Curses are the most unpleasant of the categories. This card can add adverse results after cursed items or events. It can happen if you carry the object with you but don’t wear it. You can get rid of them from a merchant, for separate money, or shrines.

Now that we’ve got the cards sorted out, let’s deal with the stats.

Health points are very significant. There is no health regeneration between battles. Defense plays a very important role in every fight. It can be healed on rest, after some events, and with the help of things and consumables.

Defense is a very complex parameter, which must be taken into account in every hit. It includes the skill of block and armor. Block is your defense for the round. Defense is also aided by your armor. This option is given by armor and some talents.

Your enemies will quite often have the skill obstacle. This means that the remaining defendants are not reset at the end of the round, but go to the next one, and continue to accumulate.

In the first act, your choices will take you on different paths through the lands of the elves or dwarves. All of them will lead you to the main boss. In each fight, you are shown the next action of the enemies, so that you can prepare for it. Here rivals are drastically different. From the beginning, your choice should be centered on which enemies you will fight.

The card makes it very easy to map out the route. You can see a marker and follow it. To build up your strength, you are better off choosing the longest roads, through merchants and resting places. 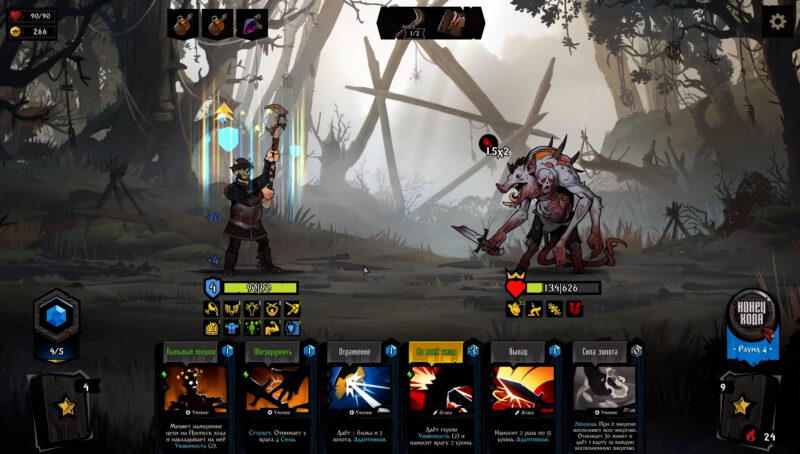 Equipment is important element of battles. They give great bonuses, especially if you’ve lived long enough to collect a set. They are also quite a lot of different ones. The kits may also involve weapons.

At each rebirth, you will have a simple sword and shield. In addition to shields and weapons, there is Armor, Boots, Helmet, Costume Jewelry, and one slot for memorabilia obtained after battles with bosses.

The game also has expendable elixirs that deal damage or increase your strength, defense, and health. You can carry them around with you.

Knock on the Coffin Lid is sure to please you. It’s addictive with a fantasy world, an interesting story, and combat mechanics. The game is available on Steam for PC. Connect with us!