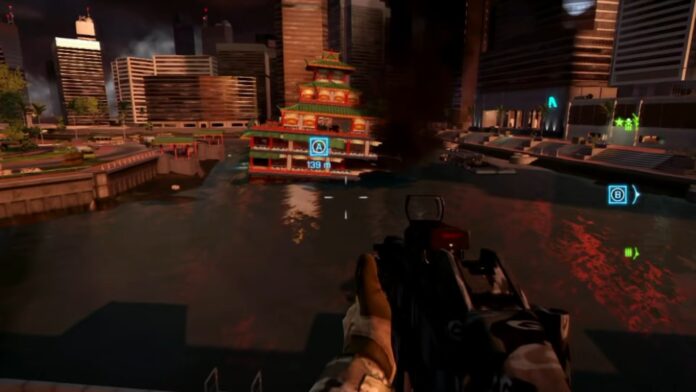 Levolution is just one of many new features Battlefield 4 brings the the series. From small things such as car alarms and elevators, to large scale destruction such as falling towers and flooding maps, levolution adds another great layer on top of the multiplayer gameplay. Read on for the full guide on all Battlefield 4 levolution triggers.

We’ve seen it plenty of times: the big tower collapsing in Siege of Shanghai. But how do you trigger the collapse? Simple, at the front of the building (facing the water), there are 4 large support columns / pillars. Destroy all four and the building comes down.

You can do this with a tank from the water front — it takes two tanks shots to destroy each pillar. Other, minor Battlefield 4 Levolution features on Siege of Shanghai include the security bollards on bridges, which can be brought up to prevent any vehicles from crossing. There are also numerous elevators that give access to rooftops on the map.

Lavolution in Paracel Storm isn’t exactly player controlled, but is quite visible: the sunny weather turns into a tropical storm, the map turns darker, the ocean waves increase significantly, and finally, the large destroyer smashes into the island.

But if you’re impatient, you can speed up the release of the destroyer — just destroy the windmill / turbine that holds it in place. Of course, once the ship gets going, it will destroy and kill any players who happen to be in its way.

Levolution is present big time on Flood Zone. As the name of the map suggests, the map gets flooded if players destroy a large levee. It can be destroyed with C4 explosives and rocket launchers, flooding most of the streets and areas on the map.

Players have to move to the rooftops instead, and access to roads gets blocked as they are flooded with water.

The Dawnbreaker map features an interesting Levolution element: the urban map has a series of gas pipes underneath, which can be pressurized by players, to a point where they explode. There are two pipe control points at each end of the map, and when both are turned on, the pipes eventually explode.

The explosion sends deep cracks across the map, creating cracks in the streets, bringing down bridges, and more. Furthermore, the light on Dawnbreaker changes from dark to light, as the sun comes up during the match.

In Golmud Railway, one of the control points is actually a train, and when a team controls that point, the train moves towards their home base, making it easier for them to defend.

Another interesting addition to Golmud Railway are strategically placed IED bombs around the roads, which can be detonated with grenades, grenade launchers, rockets. The IEDs look like a bunch of shells bundled together, with wires running to them. You can follow the wires that lead to a detonator, hidden a bit away from the bombs.

The Hainan Resort map is centered around a resort hotel in the center of the map. The left and right sides of the tall hotel can be brought down by destroying the ground levels with explosives and rocket launchers.

Furthermore, there are oil slicks all around the Hainan Resort level, which can be set on fire and alter pathways for the enemy (and set them on fire as well).

Lancang Dam, as its name suggests, features a large dam which can be destroyed by rockets, tank shots, and other explosives. It’s one of the harder Levolution events to trigger, simply because the dam requires a lot of damage before it collapses.

There is no water though, only dirt and boulders that come streaming down the map, destroying much of the surrounding area.

In Operation Locker, which is set in a prison, the big guard tower is the central control point. And it can be brought down with explosives.

Furthermore, the map features a ton of gates and doors that can be locked to prevent enemy players from entering a particular area, or use a pathway.

The Rogue Transmission map in Battlefield 4 features a large radio telescope in the middle. This telescope can be brought down by destroying a series of cables that hold it.

There are a total of 10 cables, which can be destroyed with C4, rocket launchers, vehicles, and more. Anyone directly underneath the central control point will be smashed to bits.

Zavod 311 is centered around a decommissioned tank factory with a giant smoke stack. Players can destroy the smokestack and bring it down by arming a warheard on a laptop in the industrial building. Once armed, a timer ticks down from 3 minutes, where after it will explode, resulting in the toppling over of the smokestack.